Ok I admit it. I’m addicted to Caramalised Buckinis (buckinis not bikinis!). I was recently sent some by Organics On A Budget and I’m hooked! Those on my personal Facebook profile will know how much I love these at the moment. I said I would write a post on them to explain my obsession so here it is!

What are Buckinis I hear you ask? I knew nothing about these prior to receiving them and doing a little bit of research. Organics On A Budget explains it better than I ever could:

Caramelised Buckinis are made from buckwheat coated in a delectable selection of Loving Earth ingredients. They are gluten free, alkalise our bodies and are a rich source of protein, rutin and manganese.

To make the Caramelised Buckinis we flavour buckwheat with Agave, Mesquite and Cinnamon after we have soaked it and before we dry it.

It looks like a grainy cereal, it sounds like some kind of wheat – but surprisingly enough, buckwheat is none of those. It is actually the seed of a fruit. In fact, buckwheat is not related to wheat at all, it comes from the sorrel, knotweed and rhubarb family.

Buckwheat does not contain any gluten thus making it a great alternative for people with an intolerance for the stuff. It has a high protein content, has all essential amino acids and is especially high in Lysine, Tryptophan and Arginine.

To activate buckwheat, we soak it, wash and rinse it, then dehydrate it at low temperatures (under 40 degrees celsius). This allows for easier digestion and absorption of nutrients.

I love experimenting with new ingredients. I munch on them as is but have also experimented quite a bit. They are a great addition to anything! So far I have made this Caramalised Buckini Granola recipe (which my partner now loves over my other granola’s listed below), muesli bars and cookies. You can also sprinkle over the top of chia pudding, yoghurt and other desserts. You can even eat as is with milk for breakfast. They are very adaptable. The 500g box goes far. Thank goodness because I looooooove these. I’ll be purchasing a couple of boxes in my next order (I have spotted a chocolate version too!).

My other granola recipes:

If you are wanting to make this without a tmx, its as simple as just melting the coconut oil, maple syrup and vanilla in a microwave safe bowl or on the stove and following all other directions. 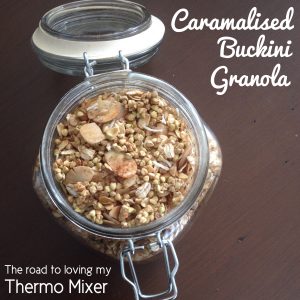