Your daily dose of varoma-therapy is here!!!

Your daily dose of varoma-therapy is here!!!

Its a bumper issue today! Lots of great recipes!!!

Chicken, leek, pistachio and prosciutto terrine
An adaption by Vicki S
Can be found here on the Recipe Community 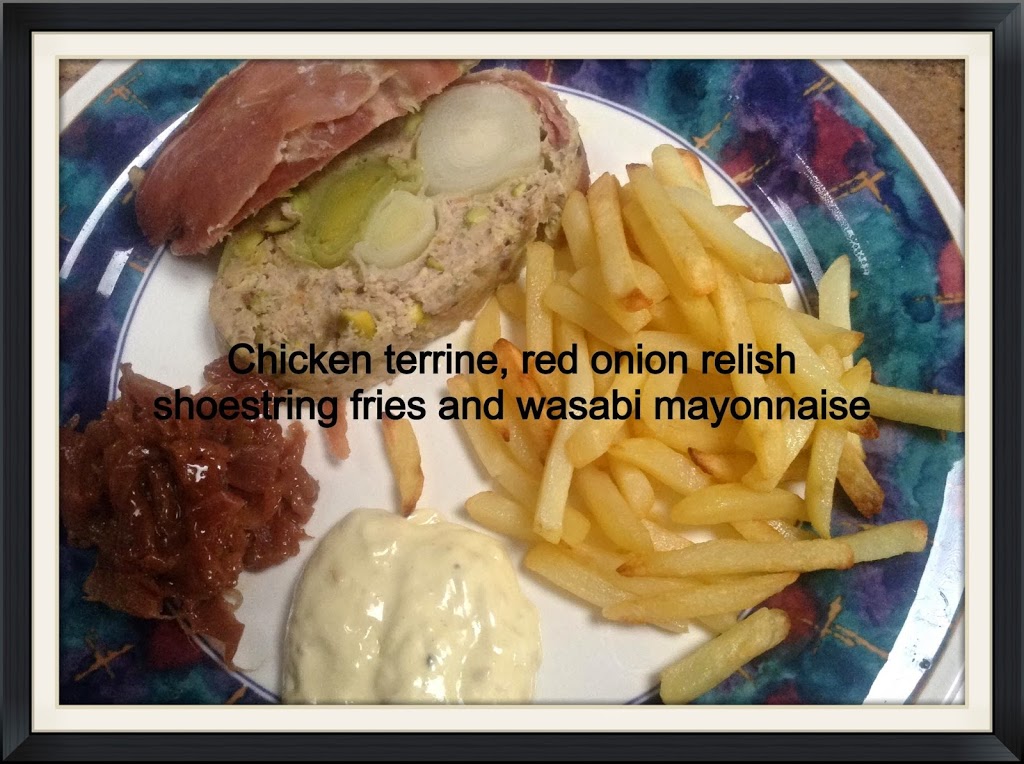 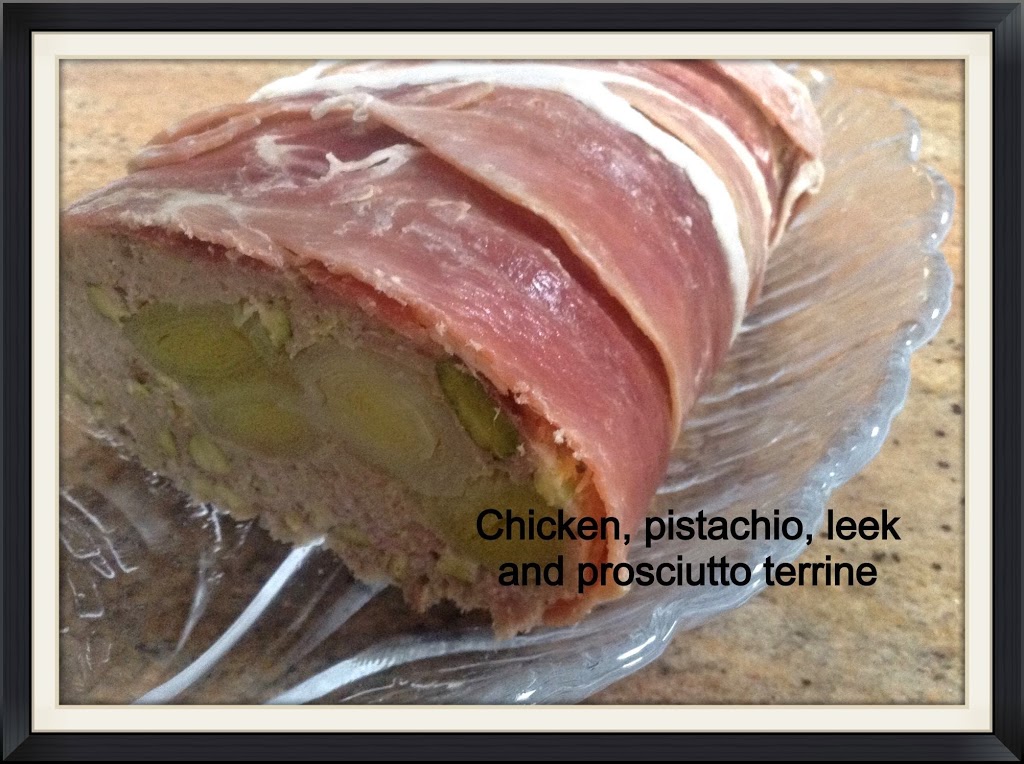 Trim tops and ends from leeks and cut in half so they fit in the thermomix basket, about 10 cm long each.  You will end up with 8 pieces.
Remove outer layer from leeks and discard. Remove another layer and reserve.
Place leeks into the basket and cook on varoma temp, speed 3/4 for 15 minutes until soft.  Remove and let cool.

2. Add the reserved layer of leeks to the thermomix bowl and chop to desired fineness.

Add oil and cook at varoma temp, speed 3 for 3 minutes.
Add garlic and chop if required ( I used crushed and sauted for a minute with the leeks).
Stop the thermomix and add chicken mince, lemon zest, breadcrumbs, cream and egg.  Use the knead function for 30 seconds or until well combined.

3.Place glad wrap on a chopping board and lay prosciutto slices, overlapping slightly across.
Spread layer of chicken mixture on prosciutto.
Lay 4 leeks halves on top so that two are joined together.
Spread half the chicken mixture over leeks and press in firmly, smoothing the surface. Add remaining leeks on top of the others, then cover with remaining chicken mixture.
4. Roll up carefully and tightly with the glad wrap.  Add more glad wrap – I did three layers.
Place in Varoma bottom dish – no need for paper.  I added hot water to the mixing bowl and cooked on Varoma, speed 3 for 1 hour 20 minutes turning once. Let cool and carefully take off the glad wrap.  I then wrapped in foil and put in the fridge overnight.  But you could serve hot.
5. Slice and serve warm or cold with red onion relish (EDC) or a tomato chutney.
6. This recipe is based on one from Coles Australia http://recipes.coles.com.au/recipes/2679/leek-and-chicken-terrine.html 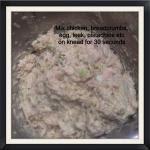 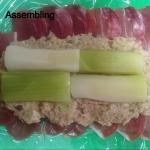 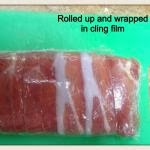 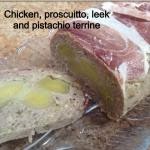 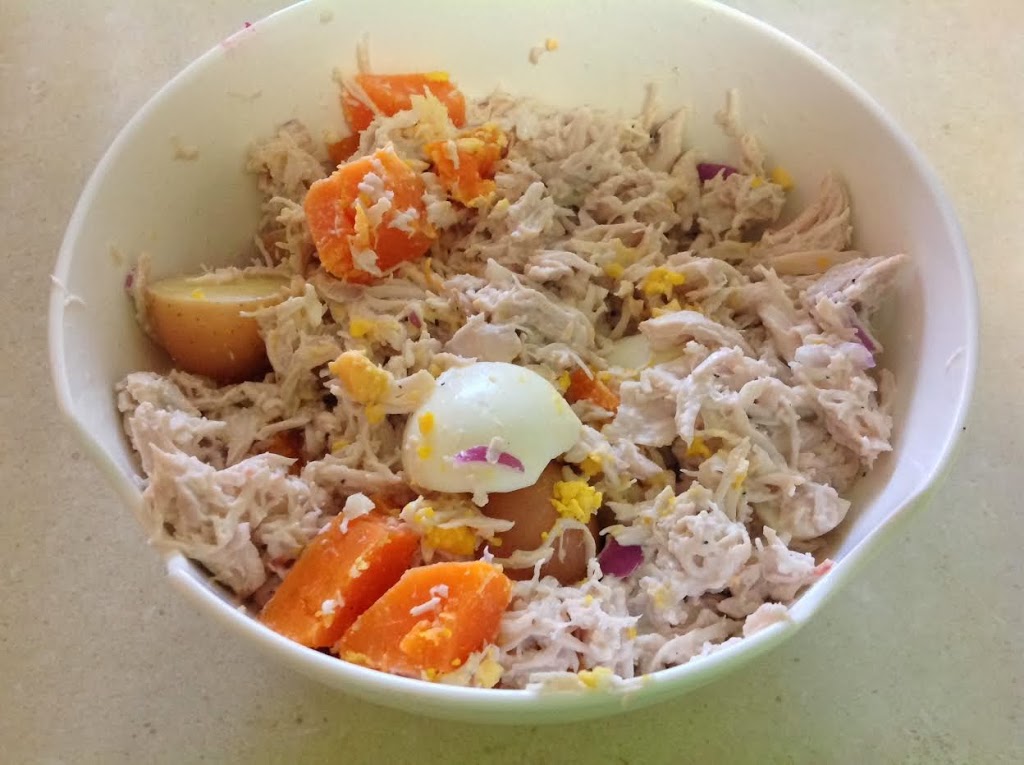 Put garlic in TM 2sec sp 5
(Put half aside (for marinade) together with juice of lemon and marinade for as long as you have time).
Add red onion in TM (with garlic) 2sec sp 5
Set onion and other half of garlic aside.
Put approx 800g of water in TM bowl
Add eggs, potato/sweet potato to steamer basket.
Put chicken in 2 layers of Varoma tray (leaving space for steam to come through)
20min,  Varoma sp 4 (check chicken is cooked through)
Remove basket and empty water.  Cut eggs in quarters and add to your serving bowl.  Add potato.
Add chicken to TM bowl and shred 4 sec reverse sp4.
Add chicken to serving bowl along with your set aside red onion, garlic and 2 tabs mayo.
Gently mix, season with salt and pepper as required and serve. 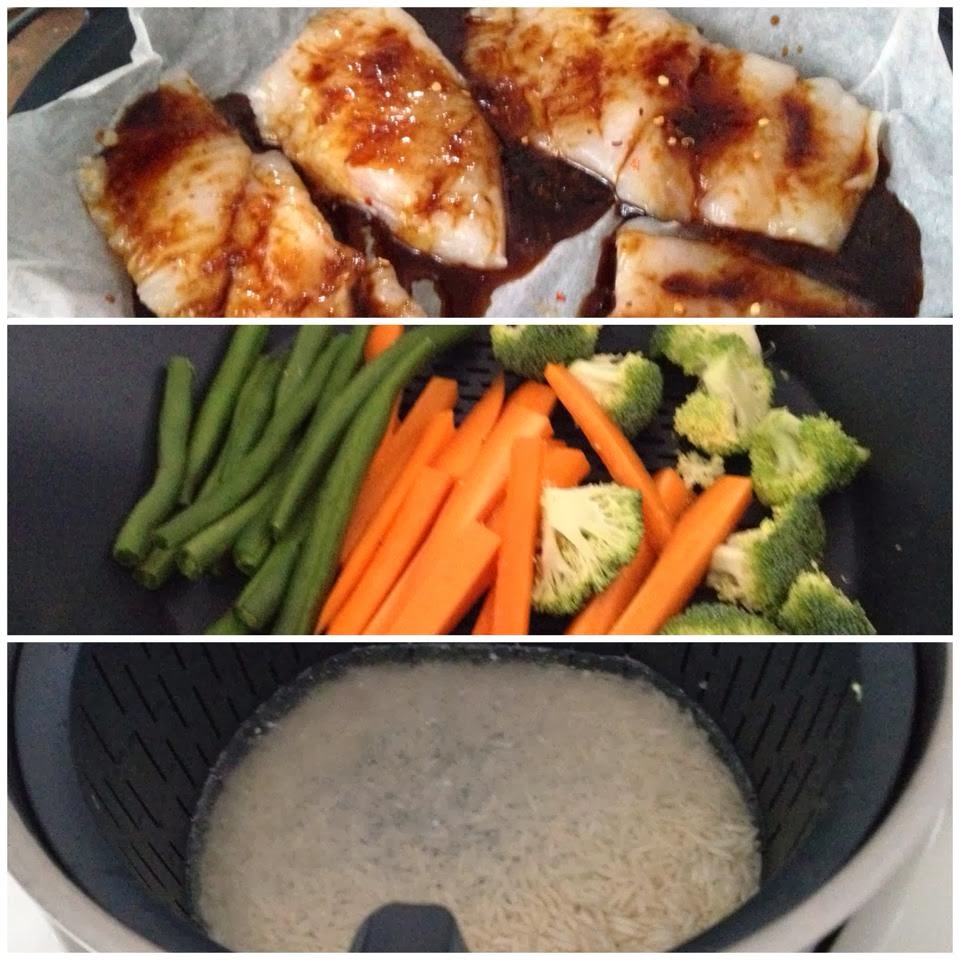 4. Whilst rice and veggies are cooking, wet baking paper and scrunch, place on Varoma tray and add fish with marinade and chilli flakes on top of fish.

5.Once 5mins is up, add Tray to Varoma with fish and set to Varoma/15min/Sp3.

6. Check on rice after 10 mins, if cooked remove TM basket.  If one element (rice, veggies & fish) isn’t cooked after the 15min, remove whatever has cooked and set TMXor further 3 mins on same settings. Use fish marinade to flavour rice and vegetables if you like.

Easy Frittata
An original recipe by Amanda
Can be found here on her blog. 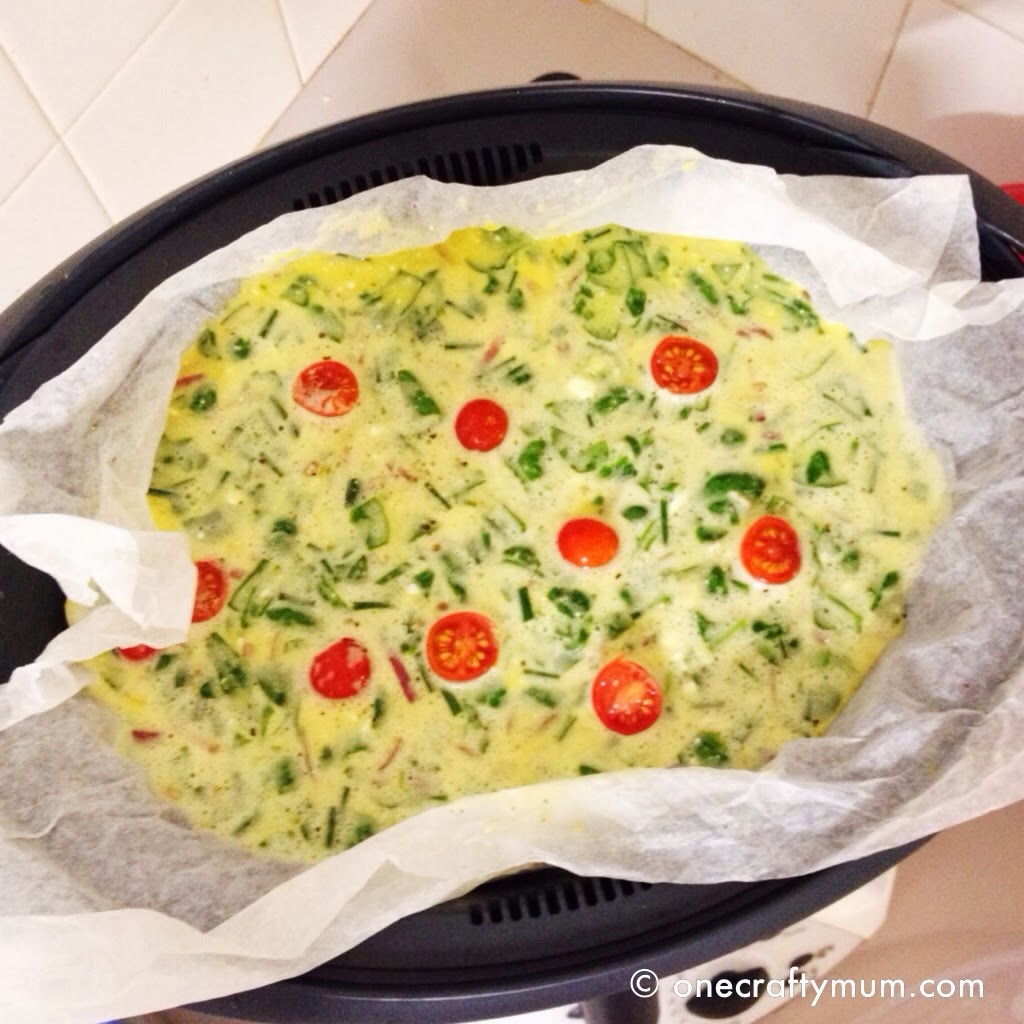 
Ham, cheese and spring onion omelette with corn on the cob
An original recipe by Raeline
It had been a long week and so I thought I would whip up something quick for dinner! It was easy enough but the omelette took a long time to cook 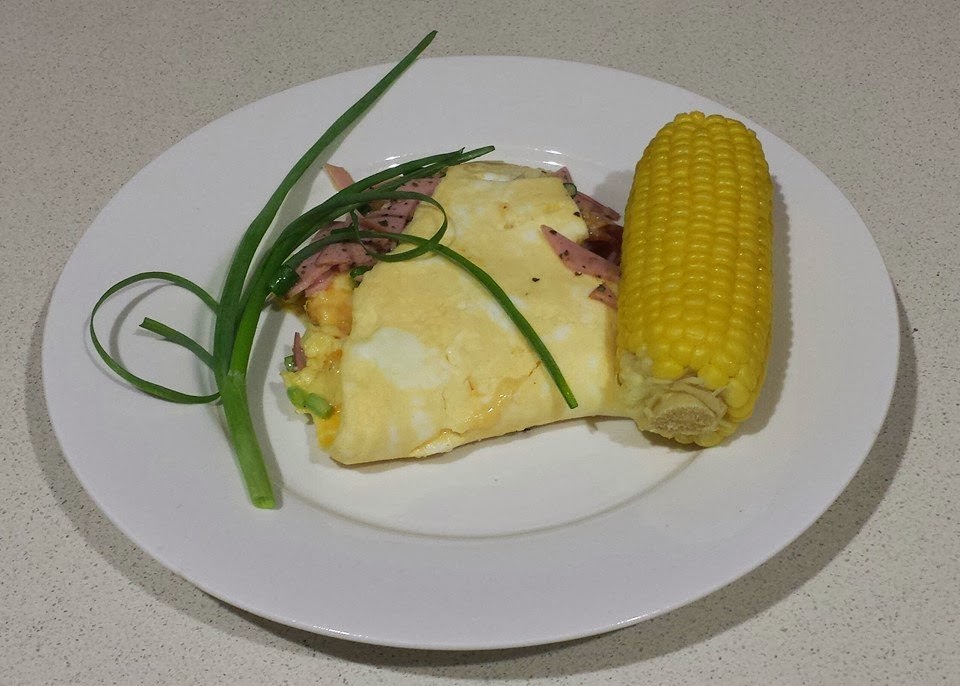 Omelette:6 eggs¼ cup milkSalt and pepper to taste½ cup block cheese – broken into pieces4 slices ham chopped3 chopped spring onions
2 corn cobs800gms water1 tablespoon vegie stock
MethodGrate the cheese in the thermomix and set asideAdd water and vegie stock to jug, insert basket and add corn cobsAssemble varomaLine top varoma tray with wet and wrung out baking paperWhisk eggs and milk in a bowl, add salt and pepper to taste. Pour egg mix into the varomaCook varoma, 15 minutes (approx) speed 4. Just as the egg is about to set sprinkle cheese and chopped ham and spring onions on half of the omelette. Lift up the paper to fold the omelette in half. Once the cheese has melted the omelette is ready.To serve cut the omelette in half and put on plate with a corn cob.
Really you could use whatever filling suited I used ham and spring onion because it was what was in the fridge!If you wanted to prepare some other vegetables in the bottom layer of the varoma this would make a tasty addition to the meal and also mean you could serve more than two people. 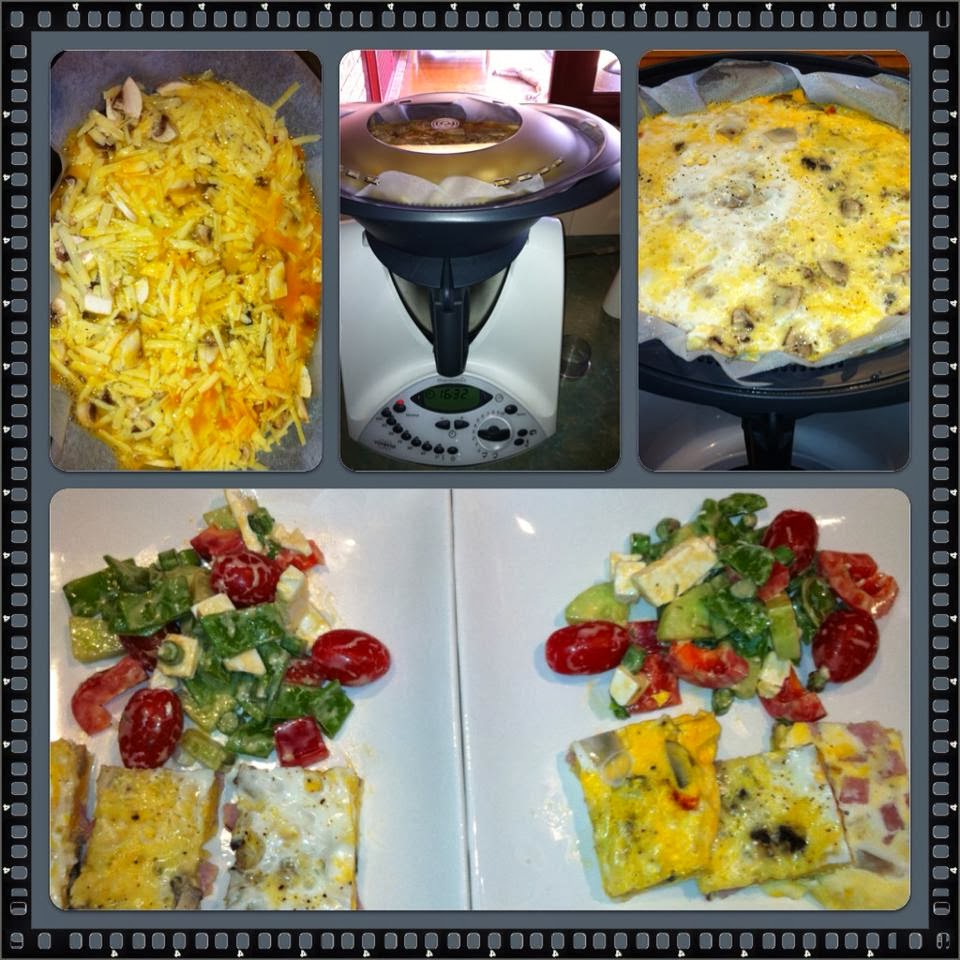 I used 6 eggs, covered the base with bacon, parmesan and coon, mushrooms and semi sun dried tomatoes, Varoma speed 3 for 20 min. My 3 boys aged 5 and under loved it. 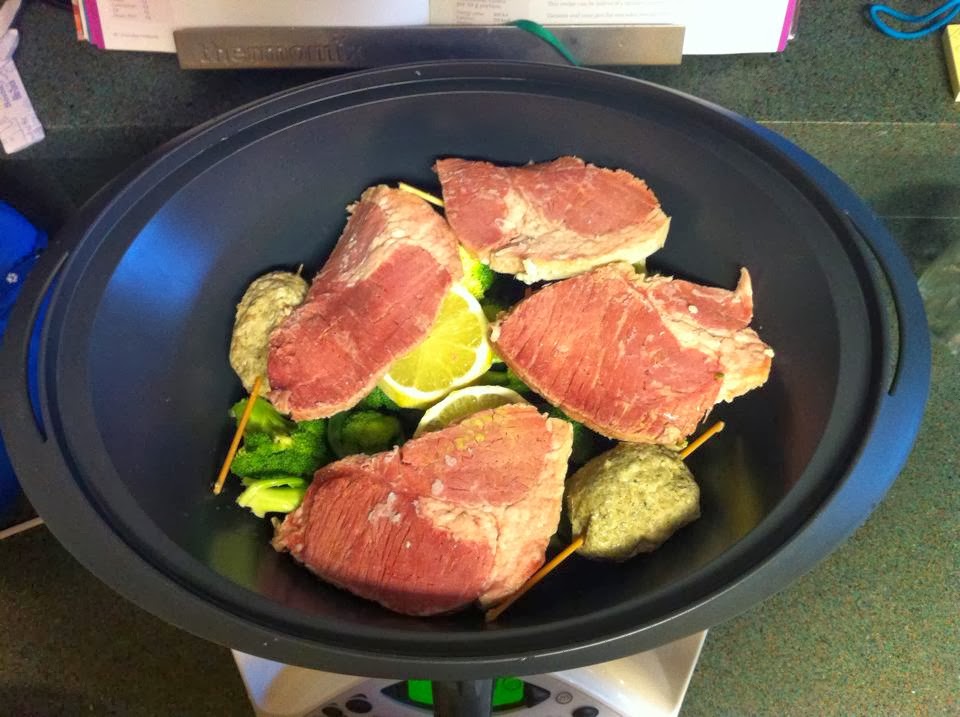 Decided to reheat the meat in the varoma while steaming the broccoli and broccolini.
Added lemons and ginger slices for flavour in the varoma dishes and then cloves, cinnamon and bay leaves to the 500mls water in the bowl.
Set for 15-20mins on  speed 2 on varoma temperature.
Sooooo good. Corned beef so sweet and succulent (just like when I cooked it in the varoma). Hubby couldn’t believe his luck. Wasn’t sure if this would work but totally thrilled with the results