Those on our Instagram would have seen a sneak preview of these the other night.

Last year I posted my Mars Bar Balls which went viral. They were seen all over the world and reached over one million people. They were are very expectant hit. I have done lots of different twists on them over the last 6 months but these Chocmallow Balls are probably our next favourite after the Mars Bar Balls.

You can make these with a whole marshmallows in the middle for quite large balls or you can use half a marshmallow for a smaller ball. If you do this you will just need to be aware of how the marshmallow slice is placed in the chocolate coating to be able to cut in down the middle and get a nice circle as shown in the picture. For this recipe I have used marshmallow halves.

If you do not have a tmx or similar, simply use a food processor to make these. 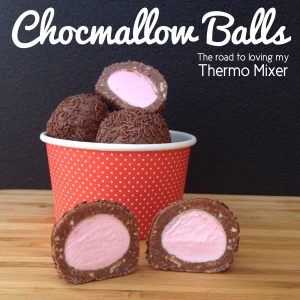