A guide to the Green Smoothie

I recently attended a Varoma Cooking Class (add it to your “to do” list! They are great and we really dont use our steaming attachments enough) and tried a green smoothie for the first time. No it wasn’t cooked in the Varoma however it was part of the menu and a great way to show how the tmx can juice and make smoothies.

What is a green smoothie?

The short answer? A drink full of lots of goodness in the form of fruits and greens with a little liquid of choice thrown in!

There are so many different ideas and guides out there. I have compiled a nice simple one. The choices are endless with green smoothies however so this is purely a guide. The only thing stopping you is your imagination! 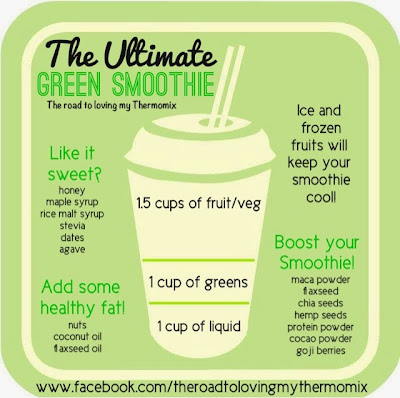 I cant say I’m sold on green smoothies just yet so I asked the experts – you! – about different combinations that were a hit in your house. Thank you so much! I now have a huge list of combinations to try.

I have done some experimenting as well and you will see the (very few) combos that I liked. Mine are very very basic however. Baby steps!

Here is lots of great ideas for you from the TRTLMT community: