Ok so this isn’t a tmx recipe. However, it is so easy, healthy and tasty that you will forgive me. Great for a healthy snack or addition to the lunchbox.

My friend Adele posted a photo of these over the weekend and as soon as I saw them I thought “I need to try those!”. My partner loves anything with cinnamon so even if these were a flop with the kiddies I knew he would gobble them up.  Adele gave me instructions on how she did hers. Mine differed ever so slightly.

They have a sprinkle of cinnamon on them. I use Saigon Cinnamon as it has the slightest sweetness to it. I found they are sweet enough as is but you can use cinnamon sugar if your apples are more tart. I used red delicious apples as I received some in my fruit order but don’t like these as an eating apple.

They were a hit with everyone and will be a regular. Store in a airtight container at room temperature for up to a week for maximum crispiness. I store in a glass jar and on day three still crunchy as day one. 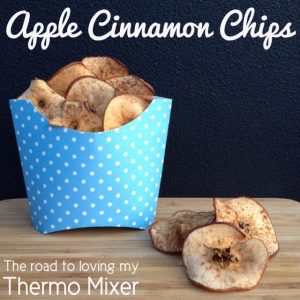